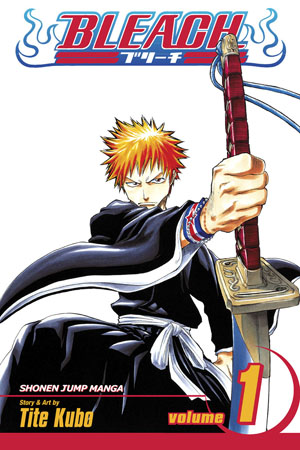 I plan to read manga daily now from now until the end of the school year, in order to go through my school’s manga and graphic novel library before I graduate. We do not have that many books, but we have them all in order, so it would be smart for me to read them while I can.

In this book, we are introduced to our main character Ichigo Kurosaki, a 15 year old who can see ghosts. One night, Ruchia Kuchiki shows up in his room, claiming to be a Soul Reaper, but like the ghosts, no one but Ichigo can see her. She says that she helps souls go back to the Soul Society, and she helps both good souls and Hollows, good souls turned bad who attack humans and eat their souls until freed to go back to the Soul Society. Ichigo doesn’t believe her at first, but soon a Hollow shows up at his house, and he has to protect his family when Ruchia is injured. When he takes her energy and uses it to defeat the Hollow, she is left without any, and he has become a full Soul Reaper. Now, he must use his powers in order to protect others.

As he starts to learn how to protect others, he has to save a classmate Orihime from a hollow that is the spirit of her older brother. After he saves her, he has to work on helping Chad, another classmate who’s parakeet has a strange soul.

I really enjoyed this as a start to a series. Ichigo is a very interesting character to me, as he could always see ghosts for some reason, and now he can protect and save those souls himself. I hope that in the future of the series that we will see more of Ruchia’s backstory, as for now no one is looking for her and no one really knows that she exists.

Join 821 other followers
Follow Bri's Book Nook on WordPress.com
Briennai's ReaderRank
Briennai has reviewed 622 books with an average rating of 4.398 out of 5.
118 people have found Briennai's written reviews to be helpful on Goodreads.
See more...