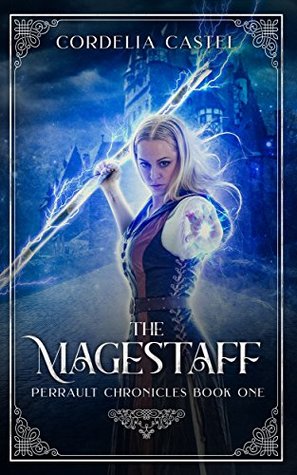 This book used to be named Cendrilla, and I reviewed it before. Now, this is a fully redone version, with a new name, and I fell in love with it even more! Watch out for its release on March 15!

Rilla is sixteen years old, six feet tall, and has lived with her stepmother and stepsisters for several years. These years have been the worst of her life, and she hopes to be able to escape someday. When Lord Bluebeard comes calling, she prays that he is not interested in any of them. Bluebeard’s reputation for killing his wives and beating his servants frighten her to pieces. When she is bought from her stepmother as his betrothed, she knows that she will have to escape before their wedding. She meets a servant named Jack, and the two of them escape. However, now they are fully in the magical world with creatures of all sorts.

I absolutely adore Rilla, and as a fellow tall girl, I can deal with some of her struggles. I might not be 6 feet tall, but at 5’9″/5’10” I am still pretty high on the height scale. This story really makes girls who are tall feel like they can be the heroes, rather than just petite, dainty princesses.

Also, the story is amazing. I love it simply because the action scenes are amazing, the worldbuilding really drew me in, and I got to become more connected to Rilla in her backstory. This extra time spent worldbuilding might have only seemed like a small thing, but it made the entire story for me.

Not to mention, this story is a fairytale retelling clearly. However, it does not just stick to the fairytales of Cinderella and Bluebeard. I won’t spoil anything but expect to see a lot when you read this one. As a person who used to love reading the old “Blue Fairy Book” fairytales when I was younger, this became a treasure hunt of sorts for me. I hope it works the same for you!

I would recommend this to anyone looking for an action-adventure fantasy novel with a unique female main character, fairytales, and magic.

I received a free advanced copy of this book and voluntarily gave a review.

One thought on “The Magestaff Review ARC (Perrault Chronicles Book 1)”