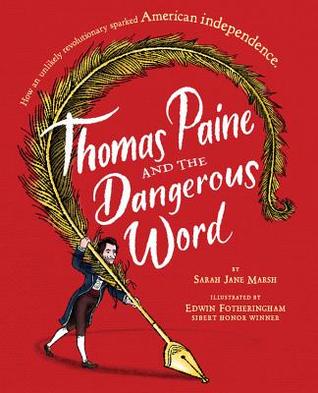 This picture book with a classic art style tells the story of Thomas Paine and how he came to write Common Sense. It is more of an older elementary school to middle school novel since the writing is a bit advanced and the topics more serious than a typical preschool picture book. Nevertheless, this would be a fun way to teach 5-7th graders about an important historical figure. To be honest, I didn’t even know much about Thomas Paine before reading this novel.

The plot tells the story of Thomas’ life, from birth to the time when he wrote Common Sense. I, as a nearly graduated senior, didn’t really know much about Thomas Paine. I knew about Common Sense, but I had completely forgotten who had written the book. Even if I had remembered, I would not have actually known anything about his life story. This picture book changes him from a dry historical figure to a person with a real story. He also shows that you don’t have to know what you want to do from childhood to be successful. He changed his mind several times in his life about his career, married different people, and failed several times before he finally became successful from writing that novel.

This book would educate readers about an important historical figure, and teach them that it is okay to fail. Just because Thomas wasn’t a decent tax collector doesn’t mean that he was a failure as a person. If he had just chosen to give up, he would have never been able to influence the American people with Common Sense.

The illustrations in this book were in a classic style that reminded me of old Charlie Brown. It fit the theme because the book is historical and the cartoons were historical. I think that they didn’t catch my attention and draw me away from the main storyline, but they weren’t boring either.

The story was also longer than a normal picture book, but this was important to be able to tell all of Thomas’ story. I don’t think that a young child would want to sit through all of it or think that all of it was interesting, but this would make for an interesting history lesson for an older kid.

I would recommend this book to older children or middle schoolers looking for a fun way to learn about a historical figure.

2 thoughts on “Thomas Paine and the Dangerous Word ARC Review”