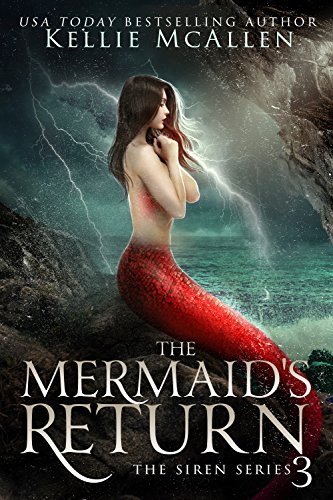 Coral has been introduced into the world of mermaids in a different shoal. All her life, she believed that the only mermaids that existed were the ones in her own kingdom. Now, she is introduced to mermaids that don’t shun the human world and ban mermaids from traveling into it, but instead embrace the human world and even send their own workers into it to live normal dual lives. Then, she meets someone who knows the truth about her past, realizing that everything she has learned is a lie.

She returns to her home with Gio, Avery, Jude, and Liam, but she knows that she has to return to her people and set them free. Coral must decide whether or not to leave the boys again and go home, as she might never be able to return.

I have loved this series since I started reading it last year, and I am sad to see it end. Fortunately, it ended without many obvious storylines being left unfinished or any random extra plot added. Instead, it was simply a smooth path that linked previous stories to this one in order to wrap everything together.

The world-building expanded ten-fold in this book. Coral learns about how the other mermaid shoals work, and the readers get to see the majority of mer-people society outside of Coral’s small shoal. It makes readers think about how much her status as “Princess” truly mattered if she was only the “Princess” in her small community. It also shows how oppressive her government was by refusing to let their shoal interact with others. I only wish that a little more time had actually been spent exploring the politics and environments

The plot moved smoothly without any holes or time-skips. It also gets quite intense with several of the more spoiler-y bits about Coral’s past, and I found myself sitting on the edge of my seat as I tried to read as quickly as possible. I finished this book almost completely in one sitting while on a trip about a month ago, but I simply took a long time to figure out exactly what I wanted to say about this book.

This book has a lot of character development as the stories of the characters are finished and they all become closer to Coral. The little details made the two books before it worth it, as I could remember the things that occurred previously that had been referenced.

There were no editing or formatting errors that I noticed in this advance copy of the book.

I would recommend this series to lovers of romance and reverse harem novels with fantasy elements.