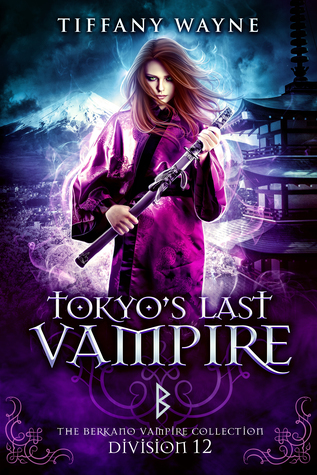 Valaria has been around since the disaster that split the world into twelve walled-off divisions and lead to her becoming a vampire. Everyone thinks that she is simply a normal teenage girl, but she is really over 50 years old. She doesn’t want to hurt anyone, instead choosing to only come out at night and stay away from friends. When her friend is kidnapped, she has to take her son and hunt for her. She has to enlist the help of a rogue named Kenshin and allow herself to get close to people again to find her friend.

Even though I read this book a bit of time ago, I forgot to write my review! I literally read this entire book in one sitting, but then never sat down to write my thoughts. I’m sorry! This doesn’t mean that the story was bad though, I actually loved this story.

Valaria is a unique and strong character. She has been through a lot since her entire world changed around her when the “Divisions” were created. Now, Tokyo is no longer the place she thought it to be. No one has been able to travel over, under, or around the Divisions, so countries have been split and entirely new cultures created. Tokyo is not even called Tokyo, but instead Division 12. Since she is a vampire, she is one of the only people who actually remember when the world was split.

She wasn’t always a vampire, but the story as to how she became one is full of spoilers, so I won’t say anything about it. Just know that it makes her character even more unique.

Even though this book did have some romance, I didn’t feel overwhelmed by it in any way. The main focus of the story was Valaria’s personal growth and her accepting herself, in a way. Her journey forced her to use powers and resort to things that she would have never done otherwise, and she has to confront feelings that she has kept hidden for over 50 years.

The plot of this novel moves quickly, but it is slow enough that the details of the story can be shown and explained. The world-building is also incredible as everything from current society is changed by the Divisions, and the politics of the new universe have to be explained. Even though this new world was dark, I loved seeing Valaria and Kenshin run around in it together.

I did not find any editings errors in this advance copy of the novel.

I would recommend this book to lovers of fantasy-adventure novels with vampires and a strong female main character.