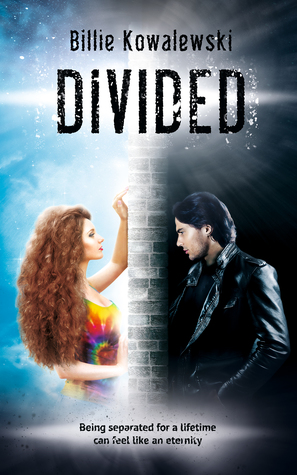 Kaleb wasn’t supposed to go to Earth without Harmony, and now he has suffered from deep depression and attempted suicide. Harmony, Luke, and Jack must come up with a plan to help Kaleb/Curtis before he succeeds at taking his own life, thus making it so that both Harmony and Kaleb are unable to return to the school or eventually graduate.

Even though this book was supposed to mostly focus on Kaleb and Harmony’s current situation with being stuck in seemingly different universes, it is mostly spent talking about the previous lives that Kaleb and Harmony have shared. This is not necessarily a bad thing! I love every bit of Harmony and Kaleb that I can get, and their previous life had a very interesting story. I will instead focus my review on that life, rather than on the current life they are in, simply because it was the majority of the story.

Veronica’s parents are divorced, and Veronica’s mother spends most of her time doting on her younger sister Katie. Her sister Katie doesn’t see any problems with her mother, but Veronica can see the truth. Her only solace is her grandmother Meme, and her best friend Jackson.

I love the fact that Kaleb and Harmony get to experience multiple lives together because that means that in nearly every book I get to see a complete life of theirs rather than just a few years! It was so special to see Veronica/Harmony grow up from a young girl scared after her parents’ divorce, to a preteen suffering under her mother’s control, to a confident teenage girl who is able to make her own decisions. I selfishly wish that some of this side story had been told from Jackson/Kaleb’s point of view as well, but I liked the way it was written either way. This story does deal with some child abuse, but it does it in a sensitive way so it should not bother anyone.

This story had amazing pacing, I flew through the entire book in almost one sitting. Even though there were timeskips, they were done in a non-confusing way, and I was able to stay in the story.

The world-building was also incredible. The story flows between Caleb’s time and Veronica & Jackson’s time, but I was still able to identify both worlds as independent entities. It was interesting to read the back and forth, and see how the worlds were unique and yet the same in some ways. I couldn’t keep up with which time period each world was supposed to be in though.

I would recommend this book to lovers of historical fiction and YA fantasy-romance novels.