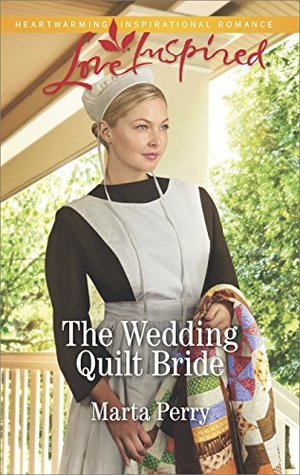 Rebecca Mast has returned to the Amish community with her son LIge after her husband passed away in a tragic accident with a horse. She hopes to be able to start over, but she finds herself in dire financial straits and doesn’t know how she is going to find her way out of the red. She meets her old friend Daniel, and he is willing to help her out, but she doesn’t want to accept charity> When some strange quirks about her son are discovered, the truth about her former relationship comes out. Will she be able to open up to her friends, family, and Daniel to accept their help? Will Daniel be able to get over his fear of people leaving to help Rebecca and her son through their emotional troubles?

Even though this book was supposed to focus more on the romance, I felt myself focusing on the relationship between Rebecca and her neighbors more. It was really interesting to see the women in the quilting circle get together to help each other out, even though they might not have all seemed that welcoming at the very start of the novel. I wanted to see Rebecca let these women in to be her emotional support as she rebuilt her life from the ground up and started her own business.

I also don’t read that many Amish romance stories, so I was shocked, to say the least, when I saw the random German (I’m assuming) words thrown in throughout the story. This wasn’t a bad thing, and I eventually caught on to what each word meant. It just gave the book a bit more flavor and context. The setting itself was calm, in a simple farm town where people lived in houses without electricity. The Amish people did not completely cut themselves off from the outside world though, because the quilting club included both Amish and non-Amish women.

The character development is also immense. Rebecca doesn’t trust anyone after her last marriage, and so opening herself to Daniel took a long time. Also, Daniel had been hurt by family members in his life, so he didn’t know how to be open either. Both of them had a lot to learn, and not just about themselves. With some of the events that occurred in this book, they had to learn how to be open and help others around them in their own situations.

I would recommend this book to anyone looking for a new sweet and clean romance novel about adults finding themselves and learning about each other.

I received an advance copy of this book from NetGalley and this is my voluntary review.