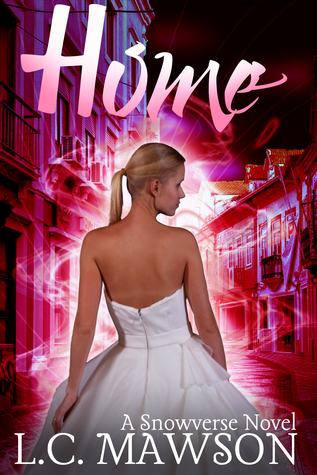 Caroline and Mina have been together for a few years now, and they are living comfortably. Caroline is still worrying that she is living in a fantasy and that she will end up getting Mina and her daughter hurt, or end up having to leave them. When more of the truth about Caroline’s past comes out, their relationship becomes even more strained. Caroline might have to return to the Underworld politics, and she doesn’t want to drag Mina and Diya down with her. Mina doesn’t want to leave her.

I am loving this new series so far! I have absolutely fallen in love with Caroline and Mina, and their family together. Also, I am loving how I am seeing the Freya Snow series through Lady Caroline’s eyes. It really allows you to understand characters such as Damon better, and gives more details to previous events that occurred in Snowverse.

The worldbuilding in this one was intense, as we get to see some of the reason why Caroline doesn’t want to be involved in Demon politics. It also gives more context about who is really in power in the Demon world.

The plot was fairly fast-paced, but I didn’t feel lost at all in this novel. I didn’t see any slow-downs or speed changes that would have interrupted my reading, so this was a good thing.

I can’t say too much about this novel, as I don’t want to spoil anything for potential readers, but just know that it really gets intense. I loved every minute of this novel.

Also, another thing that I can’t talk about too much is the character development. Just know that there was a lot of it, and certain characters seemed to change almost completely after this novel. One thing that isn’t too spoiler-y is that Diya’s relationship with her mother changes. Diya has grown up from the little girl she was in the last novel and is almost 10 years old, meaning that she wants more freedoms. Mina isn’t quite ready to give those to her, but she also doesn’t want Diya to feel burdened. She doesn’t want to compete with the father to the point that she just allows Diya to get away with anything she wants. This entire storyline was very interesting to read.

One other thing that I thought was funny was when Mina went on a group date with Caroline and her friends, the rest of whom are also autistic. Mina, being the only non-autistic person in the group, felt very awkward in the conversations, almost as if she didn’t know what was coming next, and she couldn’t fit in. It helped her to connect with Caroline more, and I thought that this was a sweet little addition to this great story.

The characters from the Almosts trilogy are also spoken about in this story, but everything takes place AFTER the last book in that series so it would have a lot of spoilers if you haven’t already read that one.

I would recommend this book to lovers of diverse fantasy novels.

One thought on “Home Review (The Royal Cleaner #2)”