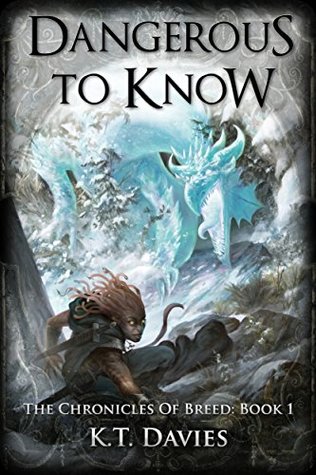 After Breed, an thief-assassin of small renown is chased by a dragon, tricked by a demon, almost killed by a psychopathic gang boss, and hunted by a ferocious spider, life really takes a turn for the worst.

Sentenced to five years bonded servitude to a one-handed priest magician, Breed must find the hammer of the ancient hero known only as The Hammer of the North within a year and a day…

So, with only a drug-addicted vagrant, a rat-faced child, and a timid priest for backup, Breed sets out for the mighty city of Valen and the tomb of the Hammer.

What could possibly go Wrong?

Even though I typically don’t like fantasy-comedy novels, I did enjoy my time reading this novel.

Breed has had a rough upbringing as Breed’s mother is a wizard who has let magic get to her brain. She hates Breed and is a psychopath, but she needs Breed to complete the missions that she cannot do. This is only the beginning of Breed’s troubles in this action-packed novel.

One unique aspect of Breed is that their gender is not actually specified at any point. This could have been purposefully done to allow more readers to connect with the character, but I would like to see if Breed actually discusses this in any novels later in the series.

However, even though Breed was made to feel relatable to all readers, I still struggled to connect with them. It seemed as if Breed had nothing to like in life. Even though they had a tough upbringing, it was still depressing to see negative things happening to breed continuously throughout the novel. I would have liked for Breed to have at least a little bit of good luck at some point in the novel. This actually made me a bit sad as I was reading the novel, and made Breed seem quite bitter for most of the story.

The world building was definitely unique, but I did want to learn a bit more about the other creatures in the world. You will definitely encounter a lot as you read through the book, and the element of surprise definitely worked for the story, but I will have to read the next book in the series to get more of the big picture.

The plot was fairly smooth. It took me a little bit of time to get into the story, but once I was in, I had no problem finishing the entire thing in almost one sitting.

I would recommend this book to lovers of dark fantasy, or regular fantasy lovers who don’t mind some dark themes throughout the novel.