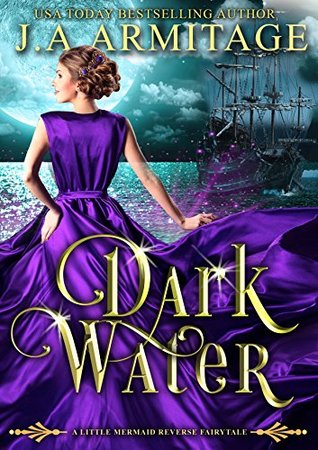 I love J.A. Armitage’s fairy tale retellings, and this one was just as good as the others! It is in another world, so even though it says Book 4, it is really Book 1 of the new section. You can read this one without reading the others, but I suggest reading them all.

Princess Erica received a boat for her eighteenth birthday, and she decides to take a ride on it. Her mother doesn’t want her to, and her fears are confirmed as a storm pops up out of nowhere and wrecks the ship. She was saved by a strange man, but when she came to in the castle, no one remembered seeing him. Then, he shows up at her birthday ball, and her attraction to him is undeniable. Even though an engagement is sprung on her, and she is banned from going close to the sea where he is, she is determined to see him. Little does she know what world she is truly getting herself into.

Let me just say that Ari was such an amazing book boyfriend! I have loved many of the guys that have been in these reverse fairytale novels, but he is definitely my favorite.

Erica was definitely stubborn in this novel, which can be annoying for some characters, but it fit her in some ways. She was determined to be with Ari, no matter what it took. Even if it meant spending time with him on land, even when he couldn’t speak, she would do it. It was love at first sight for them, and they ran with it.

She did go through a lot of character development, especially with the engagement storyline. She doesn’t want to hurt her family or her best friend, but she can’t get her mind off of Ari. This is an interesting dynamic that is explored even more throughout the entire story. She learns more about her own past and learns about why her mom is so afraid of her being in the water. I won’t spoil too much, but the personal discoveries are some of the most important parts of this story.

The plot pace is always perfect in these reverse fairy tale retellings. It was suspenseful and did not drag, but I didn’t feel as if I was being dragged along for the entirety of the story.

I can’t wait for the next retelling that Armitage releases!

I would recommend this book to lovers of romance novels and fairy tale retellings!