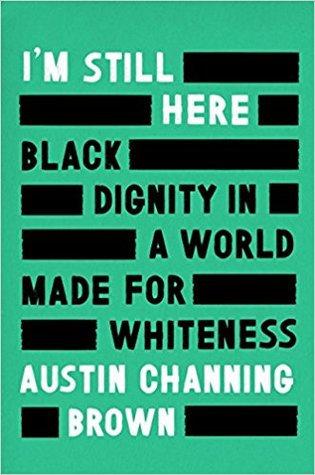 Austin Channing Brown’s first encounter with a racialized America came at age 7, when she discovered her parents named her Austin to deceive future employers into thinking she was a white man. Growing up in majority-white schools, organizations, and churches, Austin writes, “I had to learn what it means to love blackness,” a journey that led to a lifetime spent navigating America’s racial divide as a writer, speaker and expert who helps organizations practice genuine inclusion.

In a time when nearly all institutions (schools, churches, universities, businesses) claim to value “diversity” in their mission statements, I’m Still Here is a powerful account of how and why our actions so often fall short of our words. Austin writes in breathtaking detail about her journey to self-worth and the pitfalls that kill our attempts at racial justice, in stories that bear witness to the complexity of America’s social fabric–from Black Cleveland neighborhoods to private schools in the middle-class suburbs, from prison walls to the boardrooms at majority-white organizations.

This was definitely an important novel in this day and age. Mrs. Austin really talks about important issues that stem from being black in everyday life and being black in the business world. Little things that most people would just ignore really hurt Austin, such as when a girl at her school says that a black person took her place at her dream college due to affirmative action and no one decided to correct her. She had to learn how to fight through the silent prejudice at work, like when her coworkers thought she was being impersonal by leaving right after the meetings and not staying to chat, even though other people did the same thing. She even had to fight the racism within the church, the last place that she thought she would see it.

This powerful story truly shows how deep people’s prejudice could be, and revealed the subtle ways that they choose to show it. By calling people out on it and letting others know that this type of racism is still occurring, things might actually start to change for the better.

I appreciated the fact that this book was written completely in chronological order. This allowed me to see how Austin went from not understanding the racist ideals around her, to feeling as if she couldn’t escape them. Even as a reader I felt depressed reading about Austin’s work and church environment.

I also know the church racism all too well. Many people don’t know that I am a Lutheran, and have been all of my life. I have also gone to a mixed-race church and a predominantly island/African American church. Honestly, I have seen more discrimination in the predominantly island/African American church! People who are Christians might claim to love each other, and they might accept other black people coming to the church, but they don’t want anyone “different.” If someone is “too poor”, white, hasn’t come to church often enough, or gay, they wouldn’t even try to hide the fact that they aren’t welcome. If we want to work together towards ending these thigns, we can’t say “no discrimination and racism as long as you fit these conditions,” we have to say No Discrimination and Racism PERIOD.

This book has a lot to say, and I hope that more people pick it up to hear its message. I would recommend this novel to anyone looking for an inspirational novel discussing racism and prejudice in modern America and the modern church.