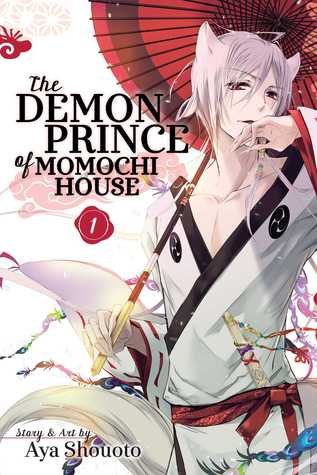 On her sixteenth birthday, orphan Himari Momochi inherits her ancestral estate that she’s never seen. Momochi House exists on the barrier between the human and spiritual realms, and Himari is meant to act as guardian between the two worlds. But on the day she moves in, she finds three handsome squatters already living in the house, and one seems to have already taken over her role!

I usually don’t read that much manga, but this one in particular caught my eye in the library. I am completely addicted!

Himari has never really known a family, so she was surprised when she randomly received an estate when she turned sixteen. Imagine her surprise when she finds that there are already people there! She decides that since the house is a mess, she will try to fix it up and run the people out. Nevertheless, the squatters are determined to stay, and one named Aoi claims that he is the protector of Momochi House.

Alright, I will admit, this one is pretty silly. Himari seems to lack some pretty common sense. If she is given a house and it is full of men, she should have called the police and had them moved out of the house. But this is not how things ever work in these books right? She is determined to move the out on her own, and then she sees that they are lonely and wants to join their little family. Not to mention the fact that her and Aoi seem to have some chemistry. Himari just has to learn how to be safe in this new house, which seems to have danger around every corner.

The art in this story is amazing. I’ll say it again. The Art. In This Story. Is. AMAZING! I loved reading it just because of how beautiful all the characters were. The only thing I really wish was that every time something evil happened that the text boxes wouldn’t turn to black. This automatically lets me know that Himari would be in trouble! It made her look even more foolish as she “walked” into danger. Making everything have the same color box, even though it would be breaking manga “rules”, would allow the story to be more suspenseful.

Even though this story has quite a bit of fluff, the main plot only starts in this novel. As I have read the next two volumes already as I am writing this review, it does get more intense as the series goes on. Believe me! I personally was shocked at how dark this series can get at times.

Also as a side note, this also reminds me a lot of the more mature visual novel “Seduce Me: The Otome.” In this novel, a girl who is a senior in high school inherits her grandfather’s estate, just to find out that 5 incubi live there. I personally loved this game, and even though it did have mature parts due to the men being incubi, it definitely had a lot of clean romantic portions.

If you like romantic stories with magical men, I would recommend both this manga and the game above.