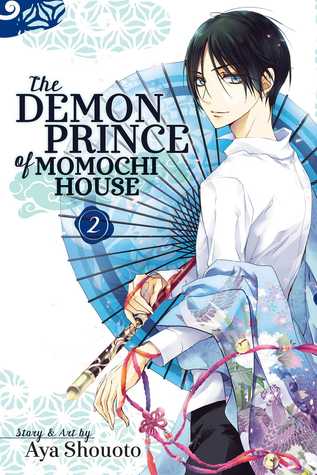 On her sixteenth birthday, orphan Himari Momochi inherits her ancestral estate that she’s never seen. Momochi House exists on the barrier between the human and spiritual realms, and Himari is meant to act as guardian between the two worlds. But on the day she moves in, she finds three handsome squatters already living in the house, and one seems to have already taken over her role!

This book focuses on the other aspects of the house and the different spirits within it. One spirit has a sister who took her own life and is on the lantern procession for the purification rite of souls that comes through the house every year. Himari learns about Aoi’s past and his role in the house. She even learns that the dangers of the demon world are not just confined to the Momochi house.

Let me just say that the scenes with the lanterns was beautiful. Even though I don’t believe in the whole “people who kill themselves go to hell/purgatory” thing, I believe that this was a beautiful way to represent that issue. The souls were able to walk peacefully through the Momochi house, and Aoi would make sure that they would make it to the next stop on their march safely.

By the time we get to the end of this novel, the intensity of the story-line increases. I won’t spoil anything, but the beginning of the next book was my favorite part of the entire story so far.

Even the entire novel wasn’t that intense, I did enjoy learning more about the Momochi house and the demons that pass through it. So far, we actually didn’t know that much about the house itself, but this book clears up some important little details. Again, I can’t spoil anything now, but I will definitely discuss them in my review of Volume 3 if you don’t mind spoilers.

I would recommend this series to lovers of romance stories with magical men, and lovers of manga.