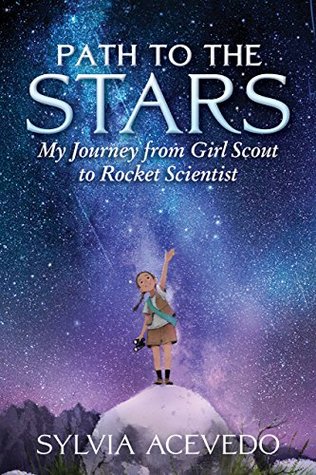 A meningitis outbreak in their underprivileged neighborhood left Sylvia Acevedo’s family forever altered. As she struggled in the aftermath of loss, young Sylvia’s life transformed when she joined the Brownies. The Girl Scouts taught her how to take control of her world and nourished her love of numbers and science.
With new confidence, Sylvia navigated shifting cultural expectations at school and at home, forging her own trail to become one of the first Latinx to graduate with a master’s in engineering from Stanford University and going on to become a rocket scientist at NASA’s Jet Propulsion Laboratory.

As a former Girl Scout, I knew that I had to read this book! Mrs. Acevedo is such an inspiration to young girls. She overcame her circumstances and a family tragedy to be successful. She always felt like an outsider, but Girl Scouts gave her a place where she felt like she belonged. She kept her uniform clean and felt a sense of pride every time she earned a badge.

Let me take a moment to actually talk about Girl Scouts! Her girl scouts career occurred in the mid 1960s to early 1970s. At the time, she says that there weren’t many math and science badges for the girls to receive. This was sad for her, as she loved math, but she had fun learning the other badges. For me, I actually had the opposite experience to some extent. When I was in Girl Scouts from around 2005-2013, there were PLENTY of badges for girls to earn. Some were based around math, science, and astronomy, and others taught girls to do things such as cook, sew, knit, run a business, and other things. I earned so many badges on my old Junior sash, and I literally earned them from just participating in different activities throughout my old city. Then, when I turned 11, things started to change.

When Girl Scouts switched to the Journey Books, everything became ten times harder. Rather than the hundreds of badges that seemed to be available before, there were only 30-40 badges available. Every badge had so many steps that one really had to go out of her way just to earn anything. Also, the badges seemed dumbed down to some extent. Gone were the community activity badges and the very specific badges such as how to change a tire or how to change oil, and instead the only ones you could get without going through specific steps were the sports badges. It also hurt smaller troops, because now you had to buy a brand new book because all the old badges from the 1990s were defunct, and there were EXPANSION PACKS for the handbook on top of that, and you had to buy Journey books for every girl that wanted to do their own award.   Also, it made it extremely difficult to get a Bronze, Silver, or Gold award because you had to fill out this stupid Journey book rather than just creating your own project. I only have 5 actual Cadette badges and then a ton of activity specific badges based on community activities that my mother just found on sale at the Girl Scouts store and gave to our troop leader. (I will also post pictures of my old Juniors sash and Cadette vest on my Instagram account @brisbooknook to prove this point!)

That being said, this book really brought me back to the old ways of Girl Scouts, when it was truly based on teaching girls skills, getting them involved in the community, and teaching them how to be leaders. Now, it seems to mostly focus on how to get the most cookie sales and how to do some extremely basic arts and crafts, at least in my old troop. I really miss the old times, and I wish that Girl Scouts of the USA would go back to this. Hopefully Mrs. Acevedo being the CEO of the organization will change things for the better.

Mini rant being over, I loved this book. Mrs. Acevedo was so strong in the face of such criticism, and it didn’t even seem to phase her. People thought she was not going to learn because she came from a “bad” elementary school, then they thought girls would never be successful in math. She beat the odds so many times, and she became successful. Nevertheless, this story speaks about the bumps in the road that she encountered on her way. Everything from her father favoring her older brother, to the meningitis incident almost tearing her family apart. I loved every minute of reading this story, and I would definitely recommend this.

I would recommend this novel to anyone looking for an amazing success story that will have you rooting for Mrs. Acevedo the entire time.

I received an advance copy of this book through a giveaway and this is my voluntary review.