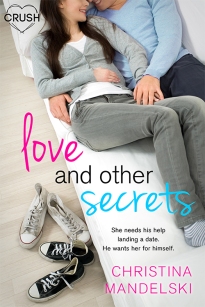 Star lacrosse player Alex “Kov” Koviak has it all. Or so everyone thinks. He’s real good at pretending his life is perfect…until he meets Bailey. The girl challenges him and pushes him and makes him laugh like he’s never laughed before. Their friendship is their little secret, and he’s happy to keep her to himself.

Between school, two jobs, and trying to get into NYU film school, Bailey Banfield has zero time for a social life. But then she meets Alex in her express lane at the grocery store, and their secret friendship becomes the only place she can breathe. She refuses to complicate that with more. No matter how charming Alex can be.

When Bailey decides to film outrageous promposals for her NYU application, she enlists Alex’s help to plan an over-the-top, epic promposal to someone else. Too bad the only prom date Alex wants anywhere near Bailey is him.

For a guy who seems to have it all, he’s about to lose the only thing he’s ever wanted.

Disclaimer: This Entangled Crush contains a cocky lacrosse player in over his head with his secret best friend, unexpected midnight kisses, swoon-worthy slow dancing, and movie-night cuddling that’ll make you ache. You’re going to want an Alex of your own!

I love reading YA high school romances, so when I saw that this one was going to come out soon, I just knew that I had to read it!

Bailey was such a unique character. She wasn’t rich and worked two jobs to save up for college and film equipment. She had dreams to win awards for her films in the future, but to get there she must succeed at winning an award for a short film and getting into a local film festival. At first, she doesn’t think anything of just finding someone to ask out for prom. But then, she realizes that a promposal is harder than she thinks, especially when she can barely string a sentence together around the person that she wants to ask.

I thought that the main plot of this book could have been solved simply by Alex and Bailey really communicating with each other and discussing their feelings. They both liked each other, but Alex just thought that Bailey wouldn’t go with him and Bailey thought the same thing about Alex. It was really a lot of dancing around, even though people around them thought that they had been dating from the start. Some parts of the novel that I can’t say because of spoilers had me facepalming because the conflict could have completely been avoided had they spoken to each other. This had me just laughing at times and cringing at others.

The only thing that irritated me was when both Bailey and Alex’s relationships with their parents were shown. Alex was upset with his parents because they always left him to go on their own adventures. But then, later in the novel, he says that he went on vacations to other countries with them sometimes. He never even really gave them the chance to be nice to him, as he was constantly hostile, even when his mom was trying to be nice to Bailey. He even got mad when he got in trouble and they tried to “parent” him, saying that they had never been there before. So which is true? Were they never in his life and just left him at home as they traveled, or were they in his life sometimes and sometimes took him on their travels? Then, Bailey introduced Alex to her parents, and she was also hostile to them. Was this just a theme in this book? Hate your parents for just…existing? Her parents were poor, but they did care about her and did try to provide for her in their own way. They even had a weekly movie night with her, which was really sweet. This was the one thing that kinda turned me off the story.

Besides this hiccup, the overall story was pretty enjoyable! I even ended up liking the people who were supposed to be “villains”. It just seemed to be a realistic YA romance novel that could be relatable to actual YA readers. I also liked that the romance stayed clean, which means that young YA fans could still read it!

I would recommend this to any YA fans looking for a romance novel of decent length revolving around getting ready for Prom.

I received an advance copy of this novel and this is my voluntary review. 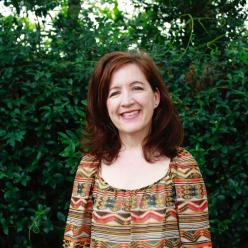 Christina Mandelski was born in South Florida, where her love of reading was cultivated in a house full of books. Stories like The Little House series, The Lion, The Witch and the Wardrobe, Island of the Blue Dolphins and The Secret Garden, filled her imagination and fueled her dreams to be a writer. That dream came true when her first young adult novel, THE SWEETEST THING, was published in 2011, and she’s beyond thrilled about her upcoming series for Entangled Crush. Chris lives in Houston with one handsome husband, two beautiful daughters, and two freakshow cats. She has a fondness for the beach, her family and friends, and she still loves to read (especially curled up with a good cup of coffee!) She also enjoys shopping, traveling and eating, especially cake. Always cake. When she’s not doing these things, you can find her holed in a cozy spot with her laptop, writing. Visit her at www.christinamandelski.com.

One thought on “Love and Other Secrets Blog Tour and Review”