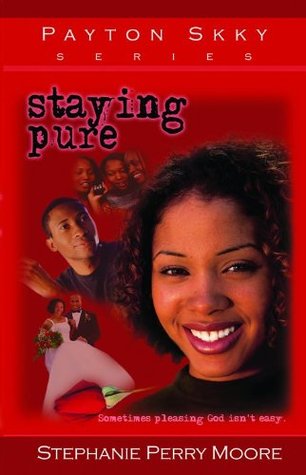 Payton Skky is beautiful and popular and dating Dakari Graham, the most attractive and desirable guy in their Georgia high school. The problem? He wants to have sex with her while she wants to obey God and stay pure until marriage. With pressures coming from all sides, Payton begins to wonder if waiting is really worth it. When he breaks it off with her for a more willing girl, Payton’s world crashes down on her. As she struggles to answer these questions and gets to know Tad Taylor, Payton realizes that following God is the real secret to staying pure.

I’ll be honest, it’s been a bit since I read a strictly Christian YA novel. Even though I am Christian, other Christians have been being so hateful lately that I have actually been too scared to even pick up any Christian fiction novels. Then I remembered Mrs. Moore’s Carmen Browne series from when I was younger and decided that I would give the Payton Skky series a try. Boy, was I in for a treat!

Payton wants to do what she believes God wants her to do and stay a virgin until marriage, but her boyfriend Dakari keeps pressuring her into having sex with him. She can’t deny that she has those feelings too, and she doesn’t want to lose the best and only boyfriend she has ever had. Even though the book focused on this issue from a Christian perspective, this is an issue that many teen girls and boys deal with. Yes, sometimes even the girlfriend of the relationship wants to do more than what the boy is ready for. She almost gives in, but by that point, he is already onto some other girl. This is the sad truth for those types of teenage relationships where a person is rushing for only the physical part of the relationship, they usually don’t end well. Then, she has a friend named Lynzi who has no problem with having sex with her boyfriend, but even he isn’t loyal to her. This story teaches teenage readers that the only way to have a healthy relationship is to find a healthy person to have that relationship with.

I’ll admit, I didn’t like Payton that much at certain times in the book. She did act immature at many times and even had somewhat of a “holier-than-thou” attitude with most of her friends. By the middle of the book, she starts to humble herself and realize that she was really no better than the other kids her age. This character development was important for the story, but it couldn’t stop me from disliking the person that Payton was at the beginning of the story.

I enjoyed the character Tad, but I don’t believe that any person can be as “perfect” as he seems to be. Sure, he is Christian and is also happy to bring God into their relationship and wait to be intimate, but something just tells me that something will happen along the line to pull the two apart. It just seems unrealistic that she would find a guy that fits everything that both she and her parents wanted in a boyfriend. Even making it that he was on the wrong path and then changed in high school through going to church would make him more realistic.

Even though I had these small issues, I enjoyed the overall story! I would definitely recommend this to anyone looking for a YA Christian fiction novel with African-American characters.