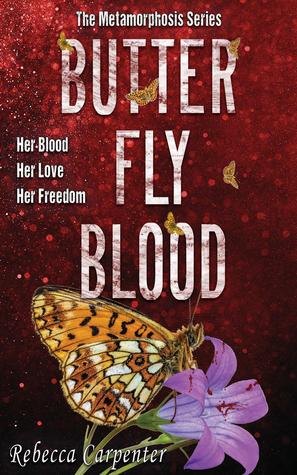 HER BLOOD. HER LOVE. HER FREEDOM.

“How many of my sins will have to be paid for in blood?”

Sixteen-year-old Bethany Keatley finally has the healthy body and looks she’s always desired. But the price she’s had to pay has left her traumatized.

The only thing making her battle on is the memory of that kiss with Jeremiah.

Now miles from him and living in Florida with an aunt she’s never met, shocking revelations about her parents are too much to bear. After collapsing from exhaustion and shock, Bethany wakes in a hospital bed awaiting test results—results that might lead to the discovery of her unusual butterfly blood.

But that’s the least of Bethany’s concerns when the doctor informs her she’s infected with a parasite and without immediate treatment she’ll die.

Too young to refuse and too weak to fight back, Bethany’s life once again hangs in the balance. Yet her scientific knowledge and suspicious nature lead her to unravel a horrifying web of lies.

So now Bethany realizes that her father was a bit crazy. Apparently, he might have killed her mother by injecting her with the cancer cells that killed her, just so she would stay with him. Bethany’s aunt is not leaving anything out of this story that she tells her. I have to say, it was interesting to see Bethany’s father as the “bad guy.” Nevertheless, it explains some of the unstable things he did, such as killing himself trying to make a cocoon and nearly running Zoey over for bullying his daughter. Most normal parents would just go to the principal about a bully, he doesn’t do anything and then tries to kill the girl.

But I digress, even with this new addition to the already hectic plot, I find myself hating Bethany more and more with this novel. First, she finds out that she has spores in her lungs that could mean that she has a deadly disease. Rather than trying to work with the doctors to find a cure, she decides to leave the hospital and try to fly back to Georgia to tell Jeremiah that she loves him. Then her aunt calls her frantically and says that her disease might be contagious, and that she needs to get back to the hospital immediately. She thinks about all the people she coughed nearby and feels bad for possibly giving them a death sentence, but her love life is definitely more important. She slaps a mask on and keeps trying to board the plane in peace. Then she realizes in a shock that she might be a “terrorist” for bringing her deadly disease on the plane and starts freaking out, allowing her aunt to collect her and bring her home. Do YA authors honestly believe that teenage girls are this stupid? She’s literally willing to kill people to get back to this “boy” that she’s only kissed one time.

Also, don’t even get me started with Jeremiah’s “side” of the story. I don’t, I can’t understand what is going on. Did she infect him by kissing him and then he made a cocoon? Why are there voices talking to him? Why are they inexplicably connected to each other? This novel does not even try to explain this, not in any of the 57 alternating chapters. Then he is randomly burned and in a hospital for the rest of the book. I just, I don’t get it. I don’t understand what was going on with his character at all, and I won’t try to force myself to. Just know that every time the book switched to his POV I was completely confused and just wanted to get the chapter over with. Usually, when a book switches to the male love interest’s POV, it is to get information on how he feels about a situation or how he truly feels about the female main character. Instead, we get some sort of half-written mess and start losing our minds with Jeremiah.

Then, there is the evil doctor side plot. Now, I read this book, and I even read it slower than I usually read other books of the same length. I still don’t see how the evil doctor was important to the main storyline. I also don’t see how the FBI got involved in everything. By the time I got to the middle of the book, I stopped trying to keep track of the plot and instead just read the information on the page and flipped to the next one. Nothing made sense, not the conflict, not the romance, not the side plot.

I am so happy to finally be done with this series, and I am not even going to attempt to read the next book in the series. I am completely finished and was lucky not to read myself into a slump trying to finish these two.

Overall Rating: 1 out of 5 stars