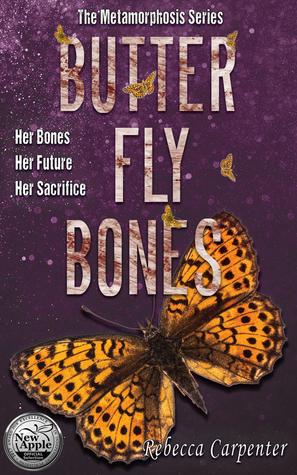 Bethany should be dead, just like the doctors predicted.

But along came the butterflies, altering the order of nature.

And now nature is hell bent on revenge.

Because when fate’s path is disrupted, it’s only a matter of time before balance must be restored.

At birth, Bethany Keatley was diagnosed with a rare bone disorder and sent home from the hospital to die. Despite losing her mother to cancer before she turned two, Bethany defeated her prognosis and now, at fifteen, with hindered growth making her appear ten years old, she is alive and well thanks to the hormone injections which her scientist father developed.

But if growing up isn’t hard enough already, being small makes her a target and a social outcast. The only way she’s been able to escape her high school tormenters so far is by working hard, achieving good grades, and through her unusual friendship with star football player Jeremiah Wright. That is until a misunderstanding with new girl Zoey Margold. Beautiful and brazen, Zoey and her followers make it their focus to break Bethany.

Yet dealing with the bullies becomes the least of Bethany’s worries. The mice on which her dad tests the butterfly hormone are showing side effects no one saw coming, and now her plan to leave the small minded town of Springs, Georgia and become a scientist has all but shattered. Her world becomes a prison and her existence a life sentence.

But nature has her own plans for Bethany.

Haunting and twisted. Like nothing you’ve ever read before.

I had many, many problems with this novel. To keep everything in order, I am going to start with my issues about Bethany’s school life.

Zoey is horribly bullying Bethany every single day, just because she “embarrassed” her on the first day of school. Bethany looked almost lost in the sea of tall people because she had never reached maturity due to her bone deficiency. Zoey was nice when she thought Bethany was an elementary schooler who got off the bus at the wrong stop, but then she became mean when she realized that Bethany was a student in her class. For starters, if Zoey was going to be the mean “Queen Bee”, why would she care about a little kid getting off the bus at the wrong stop? She should have been in character from the start, and completely overlooked Bethany. Secondly, it wasn’t like Zoey was super secretive about her hatred for Bethany. She really didn’t have a good reason to bully Bethany, so the fact that the bullying went to such an extent was rather strange to me. Also, Where were the teachers in all of this. It was no secret that Bethany had a bone disease, so why was Zoey allowed to push and chase Bethany around. If she was a normal girl who was still weak even with medication, this type of bullying could have put Bethany in real danger. I doubt that this would have really happened in an actual school. If anything, Bethany might have struggled with being smothered by people trying to make sure that she didn’t get hurt.

Let’s also talk about Bethany’s relationship with her father. Even though her father was trying to do everything to keep her safe, there were only a few situations in the book where Bethany wasn’t hostile or rude towards her father. She didn’t like the fact that he spent all of his time in the lab, even though he was trying to create a cure for her. I get that he wasn’t always there for her, but her father was trying to help her. He wasn’t just getting lost in his work to be lost in his work. If anything, Bethany should have viewed him as a hero. Bethany always seemed to play the victim every time she was bullied, but then she turned around and made the only person who really cared about her as family feel horrible.

Then we get into the main part of the plot where the lab mice start to eat ravenously and then form cocoons. Bethany realizes that she is going to form a human cocoon, and she is going to need a huge stock of food in order to gain enough weight to form it without dying like the mice. Bethany’s father does the dumbest thing I have ever seen a book scientist do. He decides that he is going to try to use the hormone on himself, accelerate it so that he gets into a cocoon before Bethany, just so that they can see how many leafy greens she will need to eat to survive. I just don’t understand why he would do that. He knew this would most likely kill him, and then Bethany would be left to go through the change completely on her own. He basically just killed himself, and then said to his daughter “Good luck creating a cocoon, please burn my house and my body.” Bethany was forced to see his rotting corpse in the cocoon for a few days, or maybe even a week or two, before she started to form the cocoon herself. Then, she was in the cocoon for two months, as the body continues to rot. If seeing your father’s rotting corpse multiple times in multiple states of decay isn’t disturbing, I don’t know what is. Also, this is advertised as a YA book. I usually am not the police of YA fiction, but this type of goriness is usually left to NA or Adult books. It is also disturbing when forms her own cocoon, I had to stop reading it a few times.

Lastly, there is the boyfriend Jeremiah. Well, I don’t know what to call him. They started off as friends, but then they went into a painful cycle of “I like you but I don’t like you” for the rest of the book. I just wanted to throw the romance in the trash entirely.

I found myself really confused at the end of the book. This seems to be where the plot takes a turn for the worse. Bethany has completed her transformation, none of her old clothes fit, but her first thought is to go kiss Jeremiah. Not get herself checked out by a doctor, or even take the money her father gave her and try to start a new life. She wants to see the boy that she hasn’t seen for two months. For all she knows, he has moved on. Then it just seems to get all over the place, with strange details about the car and other things, and then it ends. This isn’t to say that the book had the best writing throughout, but this was definitely one of the most discombobulated endings that I have read in a while.

Overall, there just wasn’t much that I liked about this book. The bullying seemed “typical” but unrealistic for Bethany’s situation, she tried to play the nice girl but she really wasn’t, and she was horrible to the one person who would do anything for her. Then the Dad dies for no reason, leaving his daughter to fend for herself, and she wakes up from metamorphosizing for two months like nothing is wrong. The final sin is that the book doesn’t even really end, but instead leaves things open for the next novel in the series. I was reading these for a tour, so I did read the second book in this series! Believe me, it only gets worse from here.