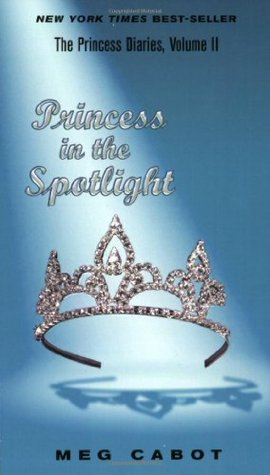 She’s just a New York City girl living with her artist mom…
News Flash: Dad is prince of Genovia. (So that’s why a limo meets her at the airport!)

Downer: Dad can’t have any more kids. (So no heir to the throne.)

Shock of the Century: Like it or not, Mia Thermopolis is prime princess material.

Mia must take princess lessons from her dreaded grandmére, the dowager princess of Genovia, who thinks Mia has a thing or two to learn before she steps up to the throne.

Well, her father can lecture her until he’s royal-blue in the face about her princessly duty–no way is she moving to Genovia and leaving Manhattan behind. But what’s a girl to do when her name is Princess Amelia Mignonette Grimaldi Thermopolis Renaldo?

So, I thought that Mia couldn’t get worse, and she surprisingly doesn’t. But she doesn’t get much better in this book.

Mia’s mother is pregnant, something left out of the official Goodreads synopsis. But it is revealed on the fourth page of the book, so it isn’t much of a spoiler. Rather than being supportive of her mom, Mia is at first upset at her mom for having ANOTHER child out of wedlock. Which isn’t really her job to judge, as she is still only 14, but I digress. Luckily, she eventually warms up to the idea and decides to be her mother’s caretaker. She has to make sure she doesn’t drink or eat anything unhealthy so that her baby sibling will stay healthy as they grow. Throughout the book, there are scenes where she literally gives away or throws out things that her mother has bought that she deems are “too dangerous” for her to eat while pregnant. And you never see anything about her mother’s reaction to these events! Why isn’t this addressed? I know if my teenage daughter threw out things I had bought with my own money, or gave them to neighbors, we would be having a serious talk. It would have been more mature for Mia to go to her mother and have a discussion about healthy eating, instead of just throwing everything away and hoping that her mother doesn’t notice. But instead she gets rid of the food, and her mother seemingly has no reaction.

The only other thing that seemed really unrealistic was when Mia was writing in her diary for English class. This diary would be given to her teacher at the end of the semester. She is writing about her favorite TV show, Baywatch, and she says that she wishes her breasts were as big as Carmen Electra’s. No one would write anything like this in a journal they are turning in to a teacher. A classmate of mine wrote a fairly mild curse word in a timed class essay without even realizing it, and was given Saturday detention because of it. No way that half the stuff Mia writes in the English journal would fly.

The main drama of this book was when Mia went to do an interview as a princess and completely flopped. Did she not practice questions for the interview beforehand? She couldn’t answer any of the questions and gave far too much personal information out to the public. I can’t believe that her strict grandmother would allow her granddaughter to go out there without proper training, embarrassing herself and her country in the process. It just doesn’t seem in-character for her. But this “drama” is what connects her more with Lilly’s brother, her secret crush, and simultaneously damages her friendship with Lilly. Because of COURSE Mia promised her first interview to Lilly’s public access television show and then forgot about it later on. I don’t even remember this promise being discussed earlier in the book, did Lilly just lie to try to make Mia feel bad? I don’t even know.

There were two things that I truly enjoyed about this book. I thought that Mia was a bit more tolerable, and she didn’t do as many things to make me outright hate her. Her father also redeems himself a bit, so I enjoyed that storyline. I even started to think that the third book might have been one that I slightly enjoyed! But a few sentences at the end of the story made me certain that the third book of the series would be just as bad as the last two. I can’t wait to finish it and give all three back to the used bookstore where I bought them.

Overall Rating: 2 out of 5 books