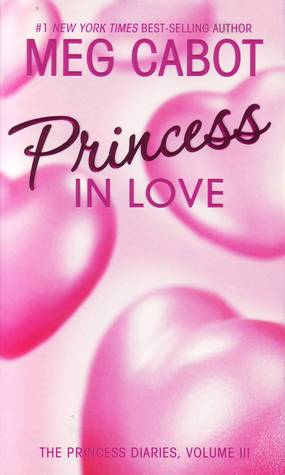 Princess Mia may seem like the luckiest girl ever.

But the truth is, Mia spends all her time doing one of three things: preparing for her nerve-racking entrée into Genovian society, slogging through the congestion unique to Manhattan in December, and avoiding further smooching from her hapless boyfriend, Kenny.

For Mia, being princess is not the fairy tale it’s supposed to be . . . or is it?

I have to say, out of the three Princess Diaries books that I have read so far, this one has to be the one that I hated the least.

Mia has done a wee bit of maturing here. Her mother is married to her Algebra teacher, but she is getting used to having him around. They do a good job of separating home and work/school, so there aren’t that many awkward altercations while Mia is still trying to be a normal freshman in high school. And even though Mia still wants to tell her mom what to do while she is pregnant, they are just a few occasional remarks instead of a constant banter about how she’s being a bad mom. Much more tolerable!

The only thing she said in this book that truly made me angry was when she said that mistletoe was a way for boys to sexually harass girls, but then makes a comment along the lines of “but it’s only harassment if the WRONG boys have it.” So does that mean that if a hot guy does it it is fine, but if a “nerdy” guy that you don’t like has it that it is harassment? But onto the story as a whole.

Kenny and Mia are together, but Mia doesn’t love him. He is constantly doing cute things for her, but her heart lies with Michael, Lilly’s older brother. Lilly actually questions her as to why she stays with Kenny when she isn’t interested in him, and this was one time where I actually agreed with Lilly. Mia just leads him on for the majority of the book, and in the end, she doesn’t even want to break up with him until the Biology test is over so that she can cheat off of him. This is cruel, but she doesn’t sneak behind his back to cheat on him (only sending a few anonymous notes to Michael), and she doesn’t dump him randomly. She is sorta nice about it? I’m not letting her off the hook, but the situation could have gone a whole lot worse than it actually did in the story.

Mia even stands up to Lilly a little in this novel! When Lilly plans a walkout during in-class final reviews, Mia knows that this will just lead to kids getting in trouble and not being able to study for finals. So instead of allowing her friend to get herself in trouble, she pulls the fire alarm. This does force the school to technically walk out, but it gets students back to class faster than Lilly’s walkout. And since her school didn’t have cameras (did they have camera’s in schools in 2002?), she was never caught. And she had a bonding scene with her stepfather, which was really cute and showed how much the characters have grown. Even though Lilly was still being herself, Mia was not going to just take it anymore, and I hope that she continues this attitude in future books of the series.

The other thing that I didn’t like but that I can’t discuss because of spoilers has to do with the grandmother. I can’t believe some of the stuff that she does, and she does something in this book that is unbelievable. She had good intentions, but she destroyed her relationship with multiple people in the process. I think that her relationship with Mia might be repairable, but it might not be, who knows.

Now I’m torn. This is the last Princess Diaries book I own, but the series JUST got good, so I kinda want to read the next book just to find out what happens. But I don’t want to fall down a rabbit hole and read myself into a slump with these books. I’ll take a break, and then who knows, I might just revisit it.