Jane Austen Lived a Quiet, Single Life-Or Did She?

Tradition holds that Jane Austen lived a proper, contemplative, unmarried life. But what if she wed a man as passionate and intelligent as she-and the marriage remained secret for 200 years?

The Marriage of Miss Jane Austen resolves the biggest mystery of Austen’s life-the “lost years” of her twenties-of which historians know virtually nothing.

• Why the enduring rumors of a lost love or tragic affair?

• Why, afterward, did the vivacious Austen prematurely put on “the cap of middle age” and close off any thoughts of finding love?

• Why, after her death, did her beloved sister destroy her letters and journals?

The Marriage of Miss Jane Austen trilogy answers these questions through a riveting love affair based on the history of the times and the details of Austen’s own life. 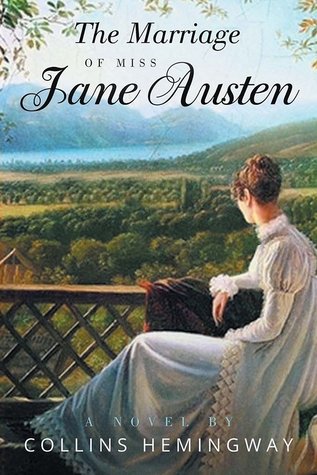 The Marriage of Miss Jane Austen Vol. I
by Collins Hemingway

Tradition holds that Jane Austen lived a prim and proper life as a single woman. But what if she wed a man as passionate and intelligent as she—and the marriage remained secret for 200 years?

Go with Jane Austen as this thinking woman, and sensitive soul, seizes the opportunity for meaningful love with a man who inspires her and understands her independent spirit—the one man worthy of her mind, heart, and soul.

This story started off with Jane and her best friend going on a hot air balloon excursion. Even though I know little to nothing about hot air balloons, Hemingway perfectly described it. I felt like I was in the sky myself! I was even scared when Jane and Ashton had to figure out how to fly the patchy balloon on their own and was exhilarated when they landed. Then I remembered that this book took place in the early 1800s and that their family is worried sick as they are spending a day or two waiting for a letter to arrive about the pair’s safety.  This perfectly depicted how some things like balloons had been invented, but the world was still far from being modernized in any way.

The first part of this book is getting to know Jane and Ashton. They aren’t together but are just friends. Jane thinks that she is already too old for marriage at 26 years old, and instantly declines Ashton’s offer of marriage. Then, most of the rest of the book is in letter form. This was a beautiful way to write the story, as several years go by, but the characters have to actually wait for the letters to arrive and be responded to. Readers can see how much passion was poured into each letter, as the barrier between friend and lover starts to disintegrate.

I knew little to nothing about Jane Austen before reading this story, and I love how the small tidbits about her life were thrown into the main romance storyline. Like she sends a letter to Ashton about the books that she had been working on, and about all the female authors that she had been having conversations with. It seemed more real. She wasn’t able to do much in society as an unmarried woman, but she decided to spend time with the other talented women of her time. Hopefully, we will get to know who some of these women were in future series installments.

The one thing I didn’t like that much about this book was that some things moved a bit too quickly. I felt like we were rushing from the balloon incident to being at home with Ashton and then Ashton was away again. If those parts had slowed down a bit, I would have loved every second of this read!

I would recommend this series to anyone looking for a new historical fiction romance to read.

Overall Rating: 4 out of 5 books

Praise for The Marriage of Miss Jane Austen Series

“A skillful portrayal of an early nineteenth-century literary icon takes this historical romance on an imaginative journey of the soul. … The adventure of a true romantic partnership and all the excitement that the nineteenth century had to offer. … [The] novel invites you to linger, to savor, and to enjoy. … Makes for wonderful reading. … A Jane that lives and breathes on the page.”—Claire Foster, Foreword Reviews, 4 stars

“Hemingway captures the energy of the times, while also writing with the irony and sly humor of Austen herself. … A strikingly real Jane Austen fully engaged in the turbulent times. … She is a living, breathing presence. … [He] displays a notable ability to recreate time and place. … A lively, compelling read, [a] sobering but moving conclusion.” —Blueink Starred Review

“An enjoyable novel in an imaginative, well-researched series. … A well-researched work of historical fiction … [with] sweet moments and intriguing historical insights. … An incredibly moving portrait of a woman facing loss and love.” —Kirkus Reviews

Whether his subject is literature, history, or science, Collins Hemingway has a passion for the art of creative investigation. For him, the most compelling fiction deeply explores the heart and soul of its characters, while also engaging them in the complex and often dangerous world in which they have a stake. He wants to explore all that goes into people’s lives and everything that makes tThe hem complete though fallible human beings. His fiction is shaped by the language of the heart and an abiding regard for courage in the face of adversity.

As a nonfiction book author, Hemingway has worked alongside some of the world’s thought leaders on topics as diverse as corporate culture and ethics; the Internet and mobile technology; the ins and outs of the retail trade; and the cognitive potential of the brain. Best known for the #1 best-selling book on business and technology, Business @ the Speed of Thought, which he coauthored with Bill Gates, he has earned a reputation for tackling challenging subjects with clarity and insight, writing for the nontechnical but intelligent reader.

Hemingway has published shorter nonfiction on topics including computer technology, medicine, and aviation, and he has written award-winning journalism.

Published books include The Marriage of Miss Jane Austen trilogy, Business @ the Speed of Thought, with Bill Gates, Built for Growth, with Arthur Rubinfeld, What Happy Companies Know, with Dan Baker and Cathy Greenberg, Maximum Brainpower, with Shlomo Breznitz, and The Fifth Wave, with Robert Marcus.

Hemingway lives in Bend, Oregon, with his wife, Wendy. Together they have three adult sons and three granddaughters. He supports the Oregon Community Foundation and other civic organizations engaged in conservation and social services in Central Oregon.

Thursday, January 17
Feature at What Is That Book About

Tuesday, January 22
Excerpt at T’s Stuff
Interview at Passages to the Past

Wednesday, January 23
Review & Guest Post at To Read, Or Not to Read

Friday, January 25
Review at View from the Birdhouse
Review at Svetlana’s Reads and Views

Monday, January 28
Review at For the Sake of Good Taste

Friday, February 1
Review at History From a Woman’s Perspective

Tuesday, February 5
Review at Maiden of the Pages

During the Blog Tour we will be giving away a $25 Amazon Gift Card! To enter, please use the Gleam form below.

– Giveaway ends at 11:59pm EST on February 9th. You must be 18 or older to enter.
– Giveaway is open to US only.
– Only one entry per household.
– All giveaway entrants agree to be honest and not cheat the systems; any suspect of fraud is decided upon by blog/site owner and the sponsor, and entrants may be disqualified at our discretion.
– Winner has 48 hours to claim prize or new winner is chosen.