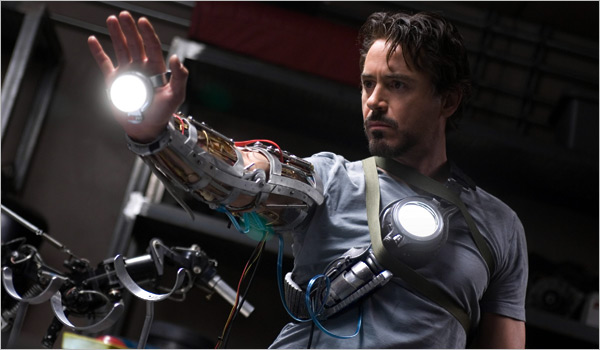 I have decided to watch all of the Marvel films before Endgame comes out. This is definitely a huge task, but I am dedicated to actually doing it! I want to be able to know the full story before I see the “end.” Of course, I will probably skip the ones that I already reviewed, but I will link them in every post from now on so you guys can read any previous reviews that I did.

So, being that I started further into the MCU with a more mature Tony, I was surprised to see Stark acting in this way. He was just so…annoying! I like his character in the later films, but boy oh boy, he has had some major character development.

You start the film with a scene where Stark was traveling to some unknown location in a desert. Tony is being his usual charismatic self and making small talk with the soldiers assigned to protect him when the van is attacked. He runs away, sees a missile with his name on it land nearby, and then he blacks out in the explosion. This was totally an epic start to this film, and I was ready for action! But before we could get into this storyline, we had to go back to how Stark got into this situation.

Stark was in Vegas gambling instead of accepting his award, and then he sleeps with a random reporter. His secretary, Pepper Potts, gets the woman out of the house in the morning and catches him up on what he has left to do for the day. This is when he goes to the desert to show the military his new missiles, and when he was in the van that got attacked.

I was surprised when Pepper Potts turned out to be his secretary. I totally thought that Pepper Potts was actually a girl he had been dating for a while, not the “sexy secretary” that he ended up falling for. I can’t say that I hated Pepper in this film, but I could already tell that Tony was a womanizer, so why would Pepper fall for him? Realistically, she had been cleaning up his messes for so long, she would probably be tired of him and would not think of him in any sort of romantic way. It was pretty random, the story giving Tony a love interest, even though he was clearly not ready and not mature enough for that kind of situation. Someone online aid that Marvel didn’t really start writing female characters well until Thor/The First Avenger, which is correct for what I’ve seen so far. Hopefully, Pepper Potts will improve with better characterization in future films.

When Stark is captured, a doctor named Yinsen saves his life by implanting an electromagnet in his heart to keep the shrapnel from the missile from killing him.  While there, he and Stark create another tiny arc reactor, replacing the primitive electromagnet and saving Stark’s life in the long run. Then, instead of working on the Jericho missiles that the captors want Stark to build, they build a weaponized armor suit to escape. Yinsen dies during the escape, and Stark is able to defeat the terrorist and be rescued by the army.

Now, we start to see Stark’s character truly change for the better. He realizes that he doesn’t want Stark Industries to produce weapons anymore if they are going to be in the hands of the wrong people. He also decides to start building a suit so he can counter some of the actions of those who are using the Stark Industries’ weapons in the wrong ways. This was how he really became “Iron Man,” and Pepper helped him run his company while he was on his leave of absence. This was probably my favorite part of the film, as Tony changed from an overgrown teenager/college student into a more mature businessman who was conscious of the things happening in his world.

He gets the shock of his life when he finds out that Obadiah has been going behind his back and producing and selling weapons to terrorist groups. The man says that he did this because he didn’t think that Tony was worthy of owning Stark Enterprises. To be completely honest, he was an understandable villain. He had been putting up with Tony’s immaturity for years and years, and he thought that this was his chance to take over the company. The country already thought that Tony had lost his mind so it would be the perfect opportunity to do so. I wasn’t mad that Tony defeated him, but he wasn’t just a villain because he randomly hated Stark. I like semi-realistic villains!

Tony’s relationship with Rhodey was very interesting to watch. Rhodey and Tony were great friends, but Rhodey had discipline from being in the army, while Tony did whatever he wanted. Rhodey even had to save Tony a few times, as the army was just going to destroy him

The last battle was pretty awesome. I loved that Pepper finally got to be useful, even though she acted kinda clueless when Tony asked her to push the button. LIke, if Tony tells you to push the button and its kind of an intense situation, just push the button? Why question it? She acts so smartly in some spots of the movie, but then when Tony needs to save her in a scene, all of a sudden she can’t even like think for herself. Besides this though, the rest of the battle was epic, and I was on the edge of my seat until the end. The addition of Tony’s power core failing on him steadily throughout definitely gave the scene a bit more suspense.

Overall, this movie was pretty good! Not as great as some of the later Marvel films, but it was definitely up there. I am glad that I am finally taking the time to see Tony’s story from beginning to end, and it makes me appreciate how much Tony has grown as a character.

I would recommend this movie to anyone looking for a fun action-comedy film.