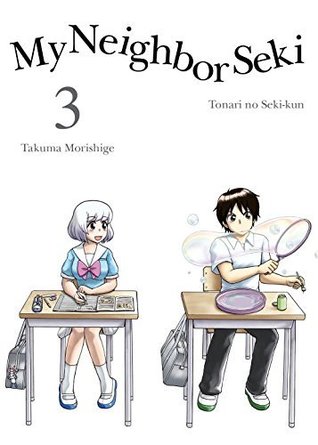 Volume 3 continues the escapades of Yokoi and her desk neighbor Seki. These stories take place in and out of the classroom, but most are in the school. One of the stories took place in a pool, but this could have been in their school since they were in with their class, so I am going to say that there was only one story that took place out of school.

My favorite story-blurb of this volume was the first one with the snow rabbit because having Seki and Yokoi playing around in the snow together was so cute.

My second favorite story-blurb was with Seki and his sister in the park because I enjoy hearing about their family lives outside of school. I hope that the future volumes also talk about their families.

I would recommend this series to anyone looking for a funny school story about a creative classmate and his easily distracted neighboring classmate. 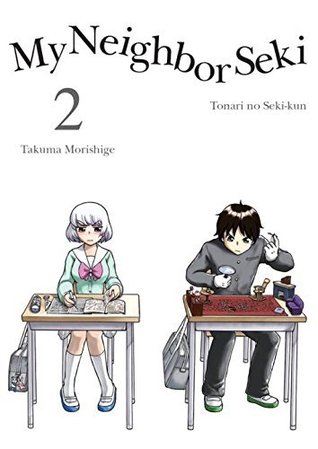 In this volume, it is almost the same as the last. Seki schemes and fools around in class, and Yokoi is always distracted by him. However, this time, not all of their interactions occur in the classroom this book! Their class goes on a hiking trip and goes to the pool during their classtime. Yokoi also meets a new friend named Goto, and she believes that Yokoi and Seki are dating.

Goto made this entire book for me. I could relate so much to her shipping daydreams during class, and I loved the fact that there was a third character for some of the story.

Overall, this book kept its cute persona and the stories were never boring to me. I also was interested by Yokoi and Seki having more interaction, and less of Yokoi simply being a stalker in this book! I will keep reading this series, and I hope to be able to finish it very soon. It always cheers me up on a bad day, and I love all of the art throughout it. 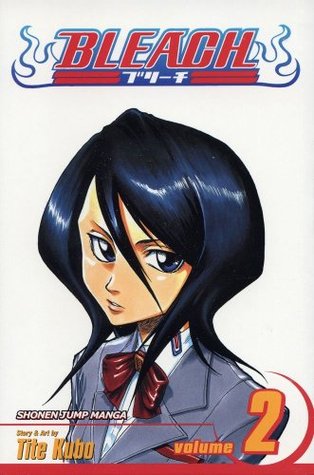 The first story is about Chad and his parakeet, yet he does not know the Parakeet houses the soul of a young boy whose mother was killed. Also, a strong Hollow spirit is terrorizing this young boy’s soul, which is causing Chad to be in danger. Now, Ichigo must save this boy and Chad simultaneously.

The second story is Ichigo’s body being taken over by a rogue soul. What is supposed to happen is that his soul leaves his body so Ichigo can act as a Soul Reaper, and his body is filled with a basic soul that can make it seem as if Ichigo never left. However, this soul is not supposed to be used, and now he struggles to regain control of his body.

I liked this volume even more than the first one. The first story was so beautifully sad, talking about a boy and how he was affected by the loss of his mother. The second story also very unique. I won’t spoil anything, but everything isn’t as simple as it seems, as you probably already know.

I can’t wait to read the next volume tomorrow!