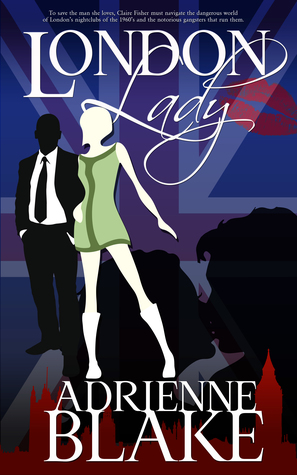 Claire Fisher works as a hostess in London’s Double R Club, and she is just happy to be making more money. Then, she finds herself in love with a man named Lucky, who just happens to work for the owners of the club. The club is owned by the Kray Twins, who are notorious mob bosses. Even though her boyfriend might want to eventually leave the mob, the Kray twins will never allow him to do that. Soon, she is just as involved as he is, and the gangsters that are stalking Lucky begin to stalk her as well. Lucky says that he will protect her, but after a tragic accident, she truly believes that Lucky will get the both of them killed.

This book is historical fiction based on the real gangs and mobs in London of the 1960s. I knew a little bit about American gangs, but nothing about gangs in the UK. This mob seemed to be exactly like the Mafia that ruled some parts of the US in the 60s. Lucky got himself in and couldn’t seem to get himself out, and Claire was involved simply because she wanted a job. It wasn’t a good situation for anyone, and it even spoke about how other gangs were no different. The Kray Twins may have seemed like tyrants, but every mob boss was at the time.

I’ll admit, it was a little tiring reading about Lucky and Claire’s romance. They seemed to always be fighting, Lucky not wanting to leave the mob, and Claire kicking him out. But then she would just let him back in, and they would start the cycle over again. It did not seem to be a healthy relationship at all, even if Lucky was supposed to be her “soulmate.” The danger that Lucky didn’t seem to understand that he was putting her in also wasn’t healthy.

I enjoyed reading about the other characters far more than I enjoyed reading about Claire and Lucky’s love life. Chris and Ginny are a lesbian couple in this story that had a happy relationship, even though Chris had ties to the mob. They had their ups and downs, but for the most part, they were just happy being together. I would have liked a whole story from their point of view, talking about how they got together and how they really just complimented each other so well. Definitely made the story worth reading.

This story does have its fair share of gore as the mob of London was quite violent at the time. I can’t say much about the really bad parts as they have a lot of spoilers in them. Just don’t read if you are the faint of heart, especially not the end. I had to take a break when I was reading that, just to relax from the suspense.

The setting was just as gritty as the topic of the book, and I wanted to read more about how the streets of London were so seedy back in the 1960s. It’s interesting to read about that in-between time when England wasn’t fully rebuilt from the wars and was still trying to get back on its feet. This was definitely a time where bosses like the Kray twins could come to power and take over the streets.

I received an advance copy of this book from BookSprout and this is my voluntary review.