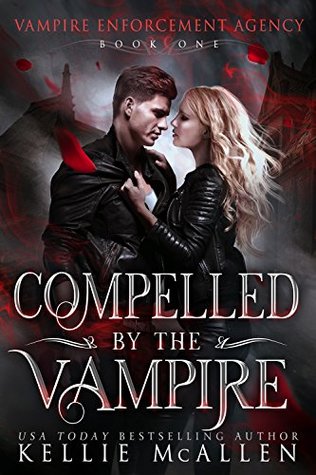 Roric is one of the good vampires. He doesn’t drink from humans, even from the legal blood banks where humans volunteer. He definitely doesn’t want to infect a human, and his job is to track down those who attack humans. When he comes across a woman who has been infected by a vampire, he knows that he should probably just let her die. Then he takes one look at her and realizes that he can’t let her die. She has already gone through half of the change as the rogue vampire already poisoned her with his venom, but now she must drink from him to complete the change.

Caroline doesn’t ever want to be a vampire. Her parents were killed by vampires, and she would rather die than become one herself. Roric’s blood completes the change, but she doesn’t want to have to give up her life for something she never wanted. Roric needs for Caroline to trust him so that she doesn’t hurt herself, or others.

After McAllen’s mermaid series, I was definitely ready for whatever new PNR came from her. Boy, was I not disappointed. Sure, this one wasn’t a reverse harem, but it was just as good.

This book mostly focused on the morality of being a vampire. In this world, vampires can drink from each other to satisfy their thirst for blood. There is also the blood bank, but this is where they will drink from volunteering humans. The “good” vampires only drink from each other or from the blood bank, and the “bad” ones attack humans. Keeping this dynamic in mind, Roric was going against everything he stood for by turning Caroline, but he just couldn’t stand to see her die. This kicks off their whirlwind romance, but I won’t say too much about how it started.

I sped through this book once I started it, and I absolutely fell in love with the side characters. Again, can’t say too much without spoiling most of the book, but they are definitely worth paying attention to.

The setting of this is the normal urban fantasy series, but there is definitely a lot of description that goes into making this world feel alive. At no point did I just give up and only think of the vampires as vampires, but instead I was always able to see them as people first. The scenes had just enough description to feel real and not overburdening.

The character development was also intense. Caroline had to get over her fear of vampires, accept the fact that she was one, and control herself so that she wouldn’t hurt anyone unintentionally. She is quite the stubborn character, which isn’t necessarily a bad thing. I felt her pain as she realizes that she can’t go back to just doing what she used to do every day without scaring those around her. Humans know that vampires exist, but they don’t know that they can exist in harmony with each other. All they know about is the attacks, which causes many who are poisoned to just allow themselves to die rather than changing fully.

I can’t WAIT for the next installment of the series. I thought that I was going to be done with this crazy anticipation for McAllen’s books, but a year later, here I am!

I would recommend this book to anyone looking for a new adult paranormal romance novel with vampires.